Acer pseudoplatanus, known as the sycamore in the United Kingdom and the sycamore maple in the United States, is a flowering plant species in the soapberry and lychee family Sapindaceae. It is a large deciduous, broad-leaved tree, tolerant of wind and coastal exposure. It is native to Central Europe and Western Asia, from France eastwards to Ukraine, northern Turkey and the Caucasus and southwards in the mountains of northern Spain and Italy.

The sycamore establishes itself easily from seed and was introduced to the British Isles by 1500, and is now naturalised there and in other parts of Europe, North America, Australia and New Zealand where it may become an invasive species.

The sycamore can grow to a height of about 35 m (115 ft) and the branches form a broad, rounded crown. The bark is grey, smooth when young and later flaking in irregular patches. The leaves grow on long leafstalks and are large and palmate, with five large radiating lobes. The flowers are greenish-yellow and hang in dangling flowerheads called panicles. They produce copious amounts of pollen and nectar that are attractive to insects. The winged seeds or samaras are borne in pairs and twirl to the ground when ripe. They germinate freely in the following spring.

In its native range, the sycamore is associated with a biodiverse range of invertebrates and fungi, but these are not always present in areas to which it has been introduced. It is sometimes planted in urban areas for its value as an amenity tree and produces a hard-wearing, creamy-white close-grained timber that is used for making musical instruments, furniture, joinery, wood flooring and kitchen utensils. It also makes good firewood. The rising sap in spring has been used to extract sugar and make alcoholic and non-alcoholic drinks, and honey is made by bees collecting the nectar. 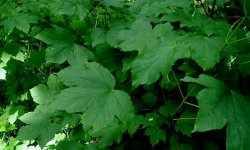