Quercus ilex, the evergreen oak, holly oak or holm oak, is a large evergreen oak native to the Mediterranean region. It takes its name from holm, an ancient name for holly. It is a member of the Cerris section of the genus, with acorns that mature in a single summer. Quercus rotundifolia was previously thought to be part of this species, but was later moved to its own.

The resemblance of the foliage to that of the common European holly, Ilex aquifolium, has led to its common and botanic names. The name ilex was originally the classical Latin name for the holm oak, but later adopted as a botanical genus name for the hollies.

An evergreen tree of large size, attaining in favourable places a height of 21–28 m, and developing in open situations a huge head of densely leafy branches as much across, the terminal portions of the branches usually pendulous in old trees. The trunk is sometimes over 6 m in girth. The young shoots are clothed with a close grey felt. The leaves are very variable in shape, most frequently narrowly oval or ovate-lanceolate, 4–8 cm long, 1.2–2.5 cm wide, rounded or broadly tapered at the base, pointed, the margins sometimes entire, sometimes (especially on young trees) more or less remotely toothed. When quite young, both surfaces are clothed with whitish down, which soon falls away entirely from the upper surface leaving it a dark glossy green; on the lower surface it turns grey or tawny, and persists until the fall of the leaf; the petiole is 3–16 mm long. Fruits are produced one to three together on a short downy stalk, ripening the first season; the acorns usually 12–18 mm long in the UK, the cups with appressed, downy scales.

Holm oak grows in pure stands or mixed forest in the Mediterranean and often at low or moderate elevations.

Quercus ilex is prevalent from Greece to certain parts of the Iberian Peninsula, where it mixes with Quercus rotundifolia, along the northern Mediterranean coastal belt. 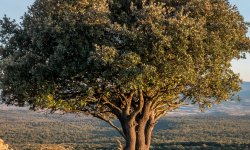